Attended the 2nd GLOBAL ISLAMIC FINANCE FORUM 2010 (GIFF 2010) at the Mandarin Oriental Hotel, Kuala Lumpur - Malaysia for 2 days i.e. from 25-26 October 2010. The theme for this year is " Islamic Finance: OPPORTUNITIES for TOMORROW ".

It was refreshing for me that the organiser chose to highlight another verse from the Al-Quran rather than the Al-Baqarah verse commonly used/associated with Islamic Finance during the Al-Quran recitation prior to the start of the Opening Ceremony. 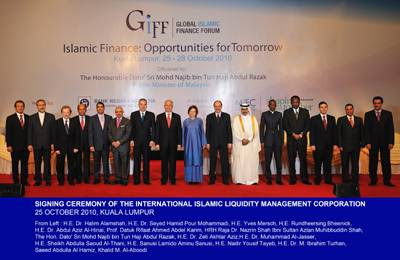 For me the highlight of GIFF 2010 must be the signing of the Articles of Agreement for the Establishment of the International Islamic Liquidity Management Corporation (IILM). The Articles were signed by Eleven(11) Central Banks and Two(2) Multilateral Organisations. Whilst the impact of IILM on IF would not be felt immediately by the IF industry, trust me when I say that its reverberation and "green foot mark" would come in the months if not years to come.

Also, of significance are Remarks by Tun Dr. Mahathir (Malaysia's 4th Premier) and Tan Sri Andrew (Economic Advisor) on GOLD and its linkages to the World economy should be noted with circumspect.

All in it was a good forum as I caught up with some old contacts from the IF industry, friends and I'd made new friends as well...prominent amongst them is Senator Reverien Ndikuriyo from Burundi as its not often you get to meet representatives from Burundi in IF forums or Conferences.


"HALAL FINANCING/ISLAMIC FINANCE by AHM" BLOG APPRECIATION:
I would like to put on record my appreciation to the GIFF 2010 Secretariat for the kind invitation. It is my fervent wish that the GIFF Secretariat invites me to future events and access to all the other sessions as well.