The NEED for a NEW International Finance/Payment Architectural Framework

Sanctions have been imposed on Iran by predominantly Christian Western countries which effectively means that Iran is "cut-off" from the International Finance / Payment System.

It's time that "birds of a feather, flock together". Countries like Iran, Syria, North Korea, Cuba, Venezuela should form their own monetary platform(s) or, payment system(s). I've no doubt that individual Muslim countries would be bullied, threaten or be stopped using "whatever means necessary"
from joining this new international finance architecture. Just look at what happened in Turkey, Morocco, Iraq & Libya to get my drift. The solution for Muslim countries afraid to be bullied and threatened is very simple - JUST ensure OIC countries joins the system en-bloc and the numbers to make the system workable and functioning will be there.

The NEW International Finance/Payment Architecture would easily bypass the "controls" of the World Bank, IMF and whatever monetary institutions the powers that be can think of next to ensure their monopoly and ultimately veto on world finances. After all who needs the depreciating, print as you want USD from a nation heavily in debt and with "questionable" financial ratings or, the EURO from a continent heavily in debt with some of its countries bankrupt!

For a start bring back the GOLD-standards or, even a SILVER-standard as an alternative. The revival of a gold or silver standard will immediately expose the "hoax" or, illusion of fiat/paper money with its numerous Quantitative Easings, Print Paper Money As You Want it culture.

Next, start building OUR own Gold Reserves. Rather than store it with the normal culprits...who would almost automatically "freeze" the assets(Gold and other assets) of the nations it wages war on - MALAYSIA is an ideal centre to house the reserves of participating countries under the NEW Financial Architecture.

Concurrently, with the re-introduction of the Gold and/or Silver standards a bilateral and eventually multilateral barter system should be established...Actual Goods/Commodities from 1 country with another country's Products.

You just wonder who will be left holding PAPER money when the New Financial Architecture takes place!!!???
Posted by aHM at 10:17 PM 1 comment: 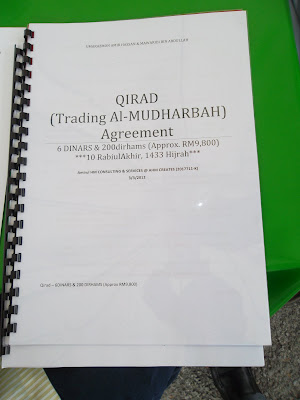 A Qirad agreement was signed at the 2nd SOUQ QAFILAH - Muamalah Madinah at Section 4, Bandar Baru Bangi.
Posted by aHM at 11:02 PM 1 comment: