"HALAL" Certificate for IF Instrument Proposed at 7th KLIFF!

During Q&A for the last session titled "SHARIAH DIALOGUE"....I was given the privilege of asking the first question to the panelists during the second round of questions. 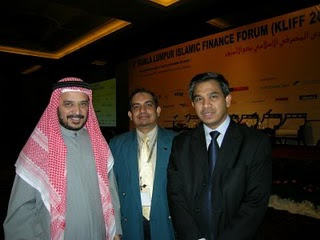 I'd suggested that since there are Halal Certificates for the food industry, why can't a similarly modified "Halal" Certificate along the lines of the 4 mazhabs be introduced for IF instruments/issues.

Elated that my Suggestion for a "Halal" Certificate for Islamic financial instruments and/or issues along the lines of the 4 mazhabs(as opposed to a general Syariah Council ruling) were received favorably by the Shariah Panelists...even from Middle East scholar Sheikh Essam Ishaq from Bahrain. Dr. Engku Rabiah even said that this will make the IF instrument even more transparent.

Dr. Akram Laldin-ISRA's Executive Director/ Session Moderator even asked me to clarify further my proposal from the floor. I clarified further my earlier question/suggestion by saying - " IBF products/contracts popular in certain countries or regions like the Al-Bai' Bithaman Ajil (BBA) can still be marketed and securitised as they appeal to a niche set of Muslim investors. Hence, the differences in opinion can be used to grow the industry even further as certain individuals/funds will still invest as long as the instrument/contract complies to a just one sect or mazhab."

TQ Shariah Panelists for the positive responses and CERT for the kind invitation
Posted by aHM at 2:07 AM